A Historical Overview of CZ Handguns During the Cold War Era

With the fall of the Third Reich in 1945, Czechoslovakia found itself under the influence of the Soviet Union. The Czech state firearms manufacture, Česká Zbrojovka (CZ) found itself being regulated by the Soviet Union. Much like the standardization of rounds in NATO, the Soviet Union standardized its ammunition when creating the Warsaw Pact. This influence had a profound effect on CZ’s development of firearms. While producing firearms in accordance with Soviet directives such as the VZ.52 and VZ.82, Česká Zbrojovka was able to develop their own models as well like the VZ.50 and CZ 75. Despite the heavy hand of the Soviet Union, CZ was able to maintain a robust, innovative firearm industry during the Cold War era.

After the end of the Second World War, CZ developed the VZ.50 for internal police use within Czechoslovakia . The firearm was based of the Walther PP and PPK with a few differences in the 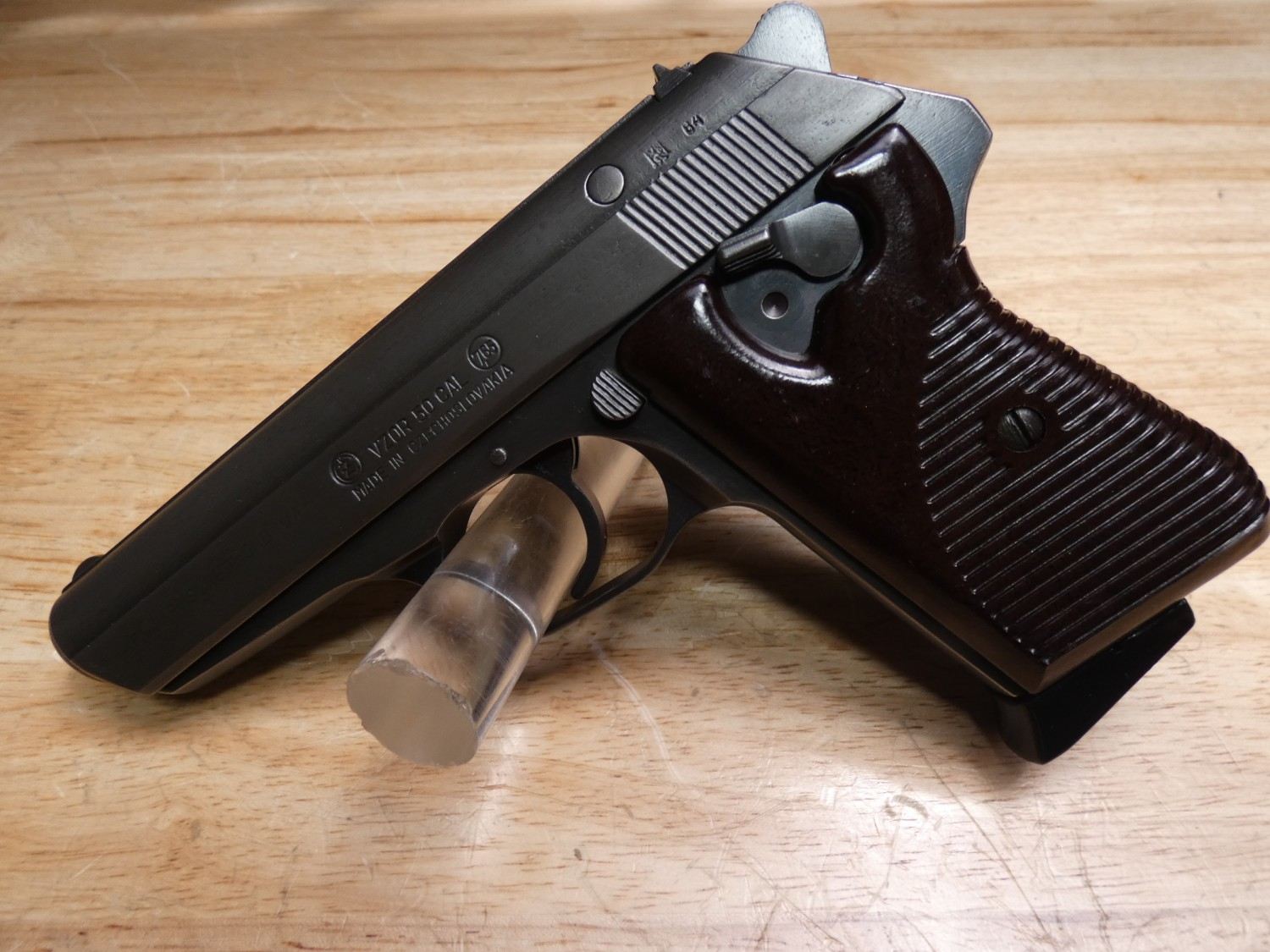 safety and assembly. The VZ.50 was somewhat underwhelming as it fired the 7.65x17mmSR (.32 ACP) cartridge loaded in an eight round magazine and had issues with reliability. These issues limited the use of the pistol to only the Czech Republic Police and the Syrian Arab Army. CZ rectified many of the issues found in the VZ.50 by upgrading many of the parts. Upgrades included the a new grip shape for improved ergonomics, smaller magazine release, a cross hatched take down lever surface and a marge hammer to name a few. The improved model was dubbed the VZ.70. These pistols served the Czech Police force until the introduction of higher quality firearm in the later part of the Cold War.

While the VZ.50 was being used by the Czech police forces during the early part of the Cold War, the military used the VZ.52. The VZ.52 was unique in the early post-war Soviet world in which the Tokarev TT-33 dominated. The Western influence that CZ enjoyed before the Second World War allowed CZ to develop a 9mm pistol just after the Second War but the strong hand of the Soviet government intervened and they were forced to manufacture a pistol that would use the 7.62x25mm Tokarev round. The result was a roller-locked short recoil operated pistol with a single-action trigger and an external hammer. Production began in 1952 lasting until 1954 in which approximately 200,000 units were manufactured. Besides Czechoslovakia, the firearm was used by the militaries of Algeria, Grenada and Tanzania. The VZ.52 was eventually replaced by the VZ.82 as the 9x18mm Makarov cartridge was standardized in the Warsaw Pact.

The VZ.82 was developed in response to the standardization to the Makarov being used by Warsaw Pact members. Approximately 30 years had elapsed between the development of the two pistol and CZ made many improvements to the aging Makarov. Magazine capacity for the Makarov round is 12 compared to the lackluster eight for the Makarov. The pistol’s fixed barrel uses polygonal rifling which combined with the low bore axis makes for an accurate pistol with low felt recoil. The chrome plated bore on the VZ.82 ensured durability and ease of maintenance. These factors led to opportunities for export. The VZ.82 was adapted for use by the police forces of Israel and Kazakhstan as well as the militaries of Indonesia, North Korea, Vietnam and Slovakia. Notably, the VZ. 82 is listed as a curio and relic with the Bureau of Alcohol, Tobacco, Firearms, and Explosives.

Beginning in 1969, CZ developed and began manufacture of what can be considered their flagship firearm, the CZ 75 . CZ asked František Koucký, their most skilled designer, to come out of retirement to create a new pistol in 9x19mm Parabellum. The innovative pistol used a slide that rides inside the rails much like the Sig Sauer P210. The operation is a short recoil operated, locked breech pistol much like the Browning Hi-Power. Unlike the P210 and the Hi-Power, the CZ 75 is a DA/SA pistol with a safety that allows it to be carried either cocked and locked in the single-action mode or decocked for double action mode. It should be noted that in order to decock the hammer, one must manually lower the hammer to the decocked position. The result is an outstanding, high capacity pistol that is accurate, reliable and has a low bore axis for low felt recoil.

The beginning of the history of the CZ 75 was fraught with censorship and secrecy. While CZ was able to design the pistol in 9mm, producing it was restricted as the Soviet Union had no intention of letting CZ deal with the West. Koucký and CZ was therefore obligated to classify it as a secret patent. As a result of this restriction, numerous other companies such as EAA, IMI, Tanfolglio among more than a dozen others began to clone the CZ 75, making it arguably one of the most cloned pistols in the world. The model began to see civilian sales starting in 1985 as it became popular in Czech shooting events. With the Velvet Revolution in 1989, Czechoslovakia freed itself from the shackles of communism and began to export the pistol as well as adapt it within domestic police forces.

The CZ 75 quickly gained popularity and was widely exported throughout the globe. It is used by law enforcement and militaries of dozens of countries notably having been used by the United States Army Delta Force and other European Special Operations units. In the sport shooting realm, it became popular and was the first pistol to dethrone the 1911 series of pistols in the IPSC World Championship. Today, the CZ 75 is the basis for all manufactured CZ handguns including the new polymer offerings, the sub-compact Rami, as well as the competition models. Nearly 50 years into its life, the CZ 75 dominates the company’s handgun development and production.

Despite the regulations of the Soviet Union, Česká Zbrojovka was able to continue developing and producing innovative designs that are used both domestically and among other nation’s militaries. The strong influence of CZ with the West during the interwar period allowed them to develop pistols unlike the other Warsaw Pact countries. The quality of these pistols are demonstrated both in their use around the world in law enforcement and militaries as well as winning international competitions. This combined with the numerous clones show the quality of the pistols and that they will continue to be used used for decades to come.