October 5, 2020 | Category: Collectable Guns, Featured Gun, Rare, Rifles
With 2020’s enormous and most destructive wildfire season ever recorded , paying a tribute to those hard working firefighters battling these infernos is expected during these trying and uncertain times. For firearms fanatics who wish to pay tribute to them, look no further than the Henry Golden Boy Firefighter Tribute edition.
This lavish rifle, inlayed with 24k golden engravings were handcut by engraver Rob Bunting and show the 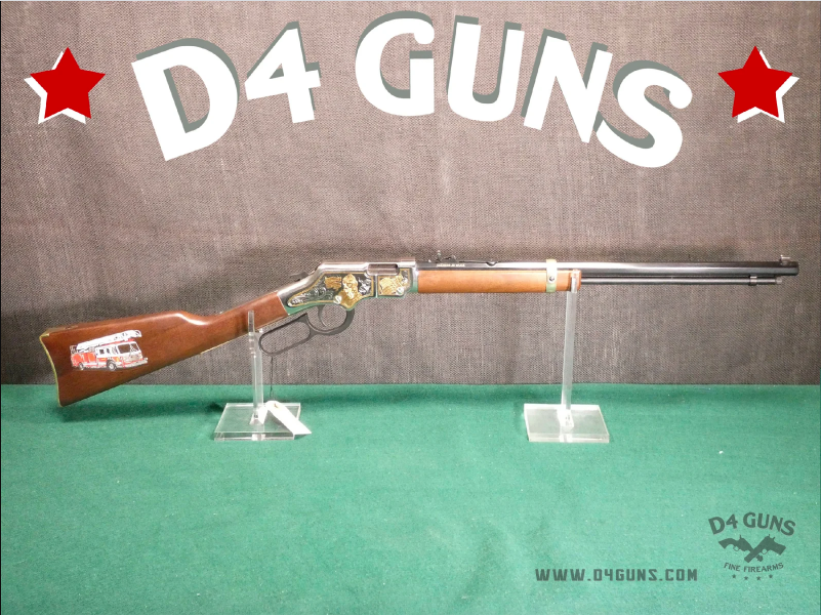 words “Tribute To America’s Bravest” and a depiction of a firefighter rescuing a baby from the flame style scroll in the background. Just in front of it is the American flag waving through the fire.
The left panel displays the Saint Florian cross and the words “Service, Valor, Courage.” Below that is a firefighter helmet with shield number 343 to pay tribute to the firefighters who perished on 9/11.
The etchings rest on a glossy and pristine nickel-plated receiver. On the tasteful American Walnut stock is a laser etched aerial firetruck with handpainted authentic colors to accompany the other fitting tributes for these brave first responders.
This lever-action Henry rifle Firefighter Tribute Edition not only commemorates the actual firefighter but also the public trust that Americans place in all firefighters who answer a call of distress.
This flashy rifle will no doubt draw the eye of both causal collectors and aficionados. It can be a perfect edition to those who want to pay tribute to these brave men and women or can be a grateful gift to an actual firefighter or fire department as a small way of saying thanks.
This penny auction listing on GunBroker.com already has some bids and will close on Sunday so act now!
Below are the details of this rifle: