When there’s a burglar at your neighbor’s house. Across the street. Behind a couple walls and the big screen. It’s time to pull out the Desert Eagle.

When it comes to power in a semiautomatic handgun, put your trust in the Desert Eagle. The weight, size and power are formidable.

This version from Magnum Research sports a full Picatinny rail atop the barrel with eight mounting slots for optics, lights or laser sights. The barrels (2) feature polygonal rifling.

This is a fine pistol for standard targets, hunting and silhouette shooting. 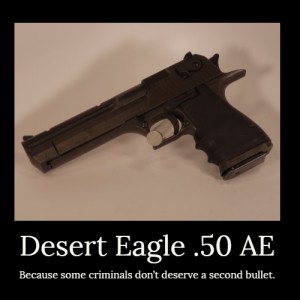 This Desert Eagles features an enhanced gas operating system, ergonomically designed ambidextrous safety levers and a DuraCoat finish. DuraCoat is a two-part chemical coating made specifically for preserving and protecting firearms. With normal use and care, DuraCoat should extend the life of this Desert Eagle by decades.

Sights include a drift-adjustable rear sight and ramp-style front sight.

This attractive package includes two barrels and two magazines, one each for .44 Remington Magnum and .50 AE. The diameter of the .50 AE and .44 Rem. Mag. are the same, so the operator only needs to swap the barrel and magazine to begin firing a different cartridge.

The Desert Eagle has appeared in hundreds of movies, T.V. shows and video games. According to leadership at Magnum Research, the commercial success of the pistol can largely be attributed to the company actively soliciting product placements in movies. Before the turn of the millennium, you might have recognized the Desert Eagle in Eraser, Rambo III, and the gun in The Matrix that took down Neo himself. 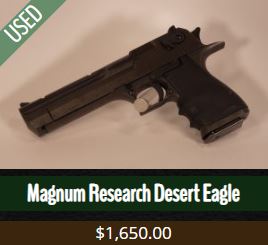 Catalyst for Manufacture: The idea was to create a gas-actuated, high caliber pistol. 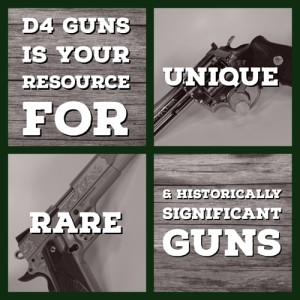