Many know this iconic gun as the Luger. Luger refers to the original designer, Georg Luger. The gun is also known as the Lange Pistole 08, LP 08 and the Artillery Luger.

Some assume that the 9mm cartridge is a modern phenomenon, but history tells us that the popular cartridge has roots with the Luger.

The P-08 name comes from the year that the German army adopted this gun, though other countries made use of the design prior to 1908.

These firearms were designed with precision and reliability in mind.

This commercial-marked German Luger Artillery 9mm has distinct features including the toggle-locked, recoil-operated action and one of most successful early ergonomic designs. Some liken the distinct design to a fine Swiss watch.

“The Luger has a toggle-lock action which uses a jointed arm to lock, as opposed to the slide actions of many other semi-automatic pistols. After a round is fired, the barrel and toggle assembly travel roughly 13 mm (0.5 in) rearward due to recoil, both locked together at this point. The toggle strikes a cam built into the frame, causing the knee joint to hinge and the toggle and breech assembly to unlock.

The barrel strikes the frame and stops its rearward movement, but the toggle assembly continues moving, bending the knee joint, extracting the spent casing from the chamber, and ejecting it. The toggle and breech assembly then travel forward under spring tension and the next round is loaded from the magazine into the chamber. The entire sequence occurs in a fraction of a second,” (Wikipedia).

If you want the oldest 9mm firearm around and you’re looking for a firearm packed with history for your collection, the P-08 is a fine choice.

The use of these guns in the World Wars pretty much guarantees that you’re purchasing a gun with a rich story. This gun is old, and the careful design will allow it to live intact in your collection for many years to come. 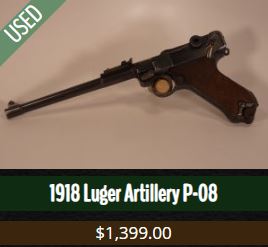