The FN FS2000® carbine is gas-operated and uses a rotating bolt lockup for reliability and greater accuracy. Its 17.44-inch cold hammer-forged MIL-SPEC barrel is fitted with a muzzle brake. Fired cases are ejected through a forward port away from the operator. The thumbhole design polymer stock is ambidextrous.

The FN Herstal FS2000 splits the firearm community when it comes to the gun’s utility and aesthetics. One aspect that gun enthusiasts enjoy about the firearm is that there is pretty much no recoil. The design is intelligent and reliable helping to mitigate the atypical appearance.

Fabrique National Herstal, aka FN Herstal, is the largest exporter of military small arms in Europe. Militaries of more than 100 countries use firearms made by FN. 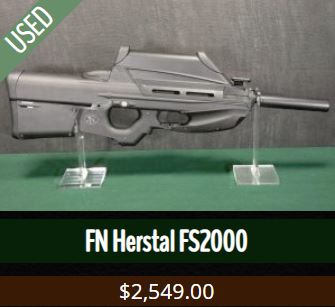