Famed gun reviewer, Hickok45, had this to say about the PS90’s selling points, “That’s what you get with a bullpup, of course. You get a full-length barrel, or at least a long barrel, that doesn’t take you way out there … It’s totally ambidextrous, either side. Your safety, your trigger’s ambidextrous. Everything is ambidextrous on this gun … that was one of the goals of it.”

Another distinct attribute of the PS90 is the “Top mounted longitudinal magazine”. The detachable box magazine sits atop and parallel to the barrel.

Chambered in the 5.7x28mm cartridge, this FN PS90® uses blowback operation and fires from a closed bolt for greater accuracy and reliability.

This PS90 is California-compliant with a modified magazine release.

Aficionados of classic firearms may shy away from modern bullpup designs such as the PS90, but even Hickock45 appreciated the merit of the PS90 when he said, “I love those old guns as much as anybody and shoot them more than these [PS90’s], but eye on function is an important characteristic … If something functions well, it gets my attention.”

FN developed the P90 in the late 1980’s and the gun went into production in 1990. The P90 was an automatic rifle designed for military use. The PS90 is a semiautomatic, civilian-legal, carbine-version of the P90 that came out in 2005.

The P90 was a response to a NATO request for a PDW (personal defense weapon) that could replace the 9x19mm parabellum cartridge. The idea was to equip soldiers working outside the frontline with a weapon they could use to defend themselves when they unexpectedly encountered the enemy. The P90 was desirable for soldiers operating ground and air vehicles.

The Belgian special forces group used the P90 in the 1991 Gulf War.

By 2009, more than 200 law enforcement agencies in the United States were making use of the P90. When the Secret Service adopted the P90, operators around the world took notice.

Hickok45 summarize the FN Herstal PS90 best when he said, “With this firearm, you want to just keep shooting.” Our team at D4 Guns agrees! 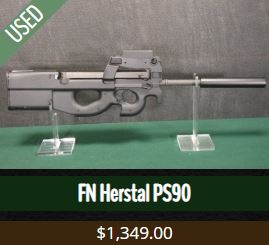 Source1 + Source2
Original Designer: FN Herstal
Catalyst for Manufacture: “NATO put out a request. They wanted a firearm that would replace 9mm as an all-purpose handgun and carbine that could be used by rear-echelon troops, maybe special forces, vehicle drivers, that kind of thing. Something small, but pretty effective. Maybe more effective than a 9mm. Accurate at range,” said Hickok45.
Maker: FN Herstal
Model: PS90
S/N: FN063003
Special Characteristics: