Featured Gun – Ruger No. 1 For Sale

What Makes The Ruger No. 1 Special?

The No. 1 uses a completely modern but classic-looking Farquharson-style hammerless, falling-block action. This action has exceptional strength.

The Ruger No. 1 chambered in .300 Weatherby Magnum is a fine choice for elk hunting and other big game.

Famed gun reviewer, Hickock45, had this to say about the No. 1, “I have admired the Ruger No. 1 for a quarter of a century … They’re classic. They’re revered. They’re a very strong rifle. They’re a pretty rifle. They’re well-made. They’re sturdy, durable. They’re a handy size.” He went on, “Just like with a shotgun … because the barrel comes back so far into the firearm, you can have a fairly long barrel … You can get a long barrel, hence, more velocity with a shorter overall firearm … ” He concluded, “There’s something about a single-shot, the mystique of it. I don’t know how many of you have experienced that …” (Ruger No. 1 in .375 H&H Magnum).

The barreled action is finished in a polished, deep blue, and the satin-finished walnut stock is hand checkered in a borderless pattern.

This one also features a Millett 3-9×44 rifle scope. The classic rifle, scope and .300 Weatherby Magnum create a set-up any operator would be glad to shoot.

Hickock45 went on to say, “They’re kind of collectable, because they’re hard to get. If you decided you wanted one in this cartridge or in a .308 or whatever it is, today, and you started looking around, you’d probably have a hard time finding one. You might find it, but it’d be kind of random.”

Every Gun Tells A Story. Here’s Ruger No. 1’s Story. 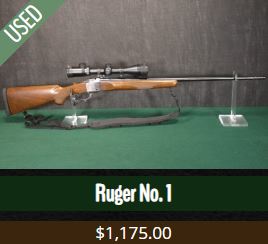 Purchase this Ruger No. 1