The M1 Carbine was the most widely produced weapon of WWII. Ten companies, some not even originally in the firearms manufacturing industry, went on to produce more than six million of these guns in just a few years.

Support troops working away from the frontline needed protection beyond sidearms. The M1 Garand was unwieldy for support troops. Soldiers fighting on the frontline also used the M1 Carbine, but it was less popular with those soldiers due to reduced stopping power.

It’s speculated that green soldiers new to the war may not have had much experience with sidearms, so the M1 Carbine offered great usability for those soldiers only familiar with rifles.

The “M1” denotes “model 1” and carbine denotes that the weapon is short and light. The “M” naming convention used by the U.S. Army started on July 1, 1925.

The .30 Carbine cartridge is less powerful than the .30-06 used by the M1 Garand, but the .30 Carbine offered U.S. soldiers “better range, accuracy and penetration” when compared to the submachine guns of the time (Wikipedia).

Due to the weight of the gun and lighter cartridge, the M1 Carbine also outdid the Tommy Gun when it came to carriable ammunition.

Some call the M1 Carbine the grandfather of personal defense weapons.

This particular M1 bears the names National Postal Meter and General Motors. The Inland division of General Motors was the largest producer of M1 Carbines.

“Few contractors made all the parts for carbines bearing their names: some makers bought parts from other major contractors or sub-contracted minor parts to companies like Marlin Firearms or Auto-Ordnance. Parts by all makers were required to be interchangeable. Often one company would get ahead or behind in production and parts would be shipped from one company to the other to help them catch up on their quota,” (Wikipedia).

According to the serial number printed on this firearm and historical records, this particular M1 Carbine was manufactured between November 1943 and June 1944 (M1Family).

This gun played an important role in world history, and it will make a fine addition to any gun collection.

The story of the M1 Carbine begins on July 1st, 1921. On that date, David Marshall Williams was accused of murdering a sheriff’s deputy during a moonshining bust.

Williams was sentenced to 30 years hard labor. He was tasked with working in the machine shop and occasionally fixing prison guard weapons. It was there that he started secretly designing the mechanics of what would later be the M1 Carbine. Despite being caught with the design, the prison warden allowed Williams to continue his work. Williams was released after only serving eight years (History of M1 Carbine).

After Williams was released, he applied for his first patent on March 19, 1935. Shortly thereafter, he teamed up with Winchester’s engineers to hone the design. They achieved the patent for the short-stroke piston on February 15, 1944.

Not long after, the U.S. military adopted the M1 Carbine as a lighter, less unwieldy option compared to the M1 Garand during WWII.

The M1 Carbine was standard for U.S. military during WWII, the Korean War and even into Vietnam. 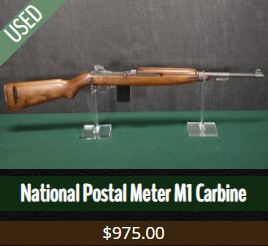 Original Designer: Credited designers include Frederick L. Humeston, William C. Roemer and David Marshall Williams. Williams first began the design while incarcerated for murder after a bloody moonshining raid.
Catalyst for Manufacture: It’s said that the M1 Garand was unwieldy and that it restricted mobility too much, so a compact infantry weapon was needed. Thus, the M1 Carbine was put into action.
Maker: National Postal Meter
Model: M1 Carbine
S/N: 4282077
Special Characteristics: