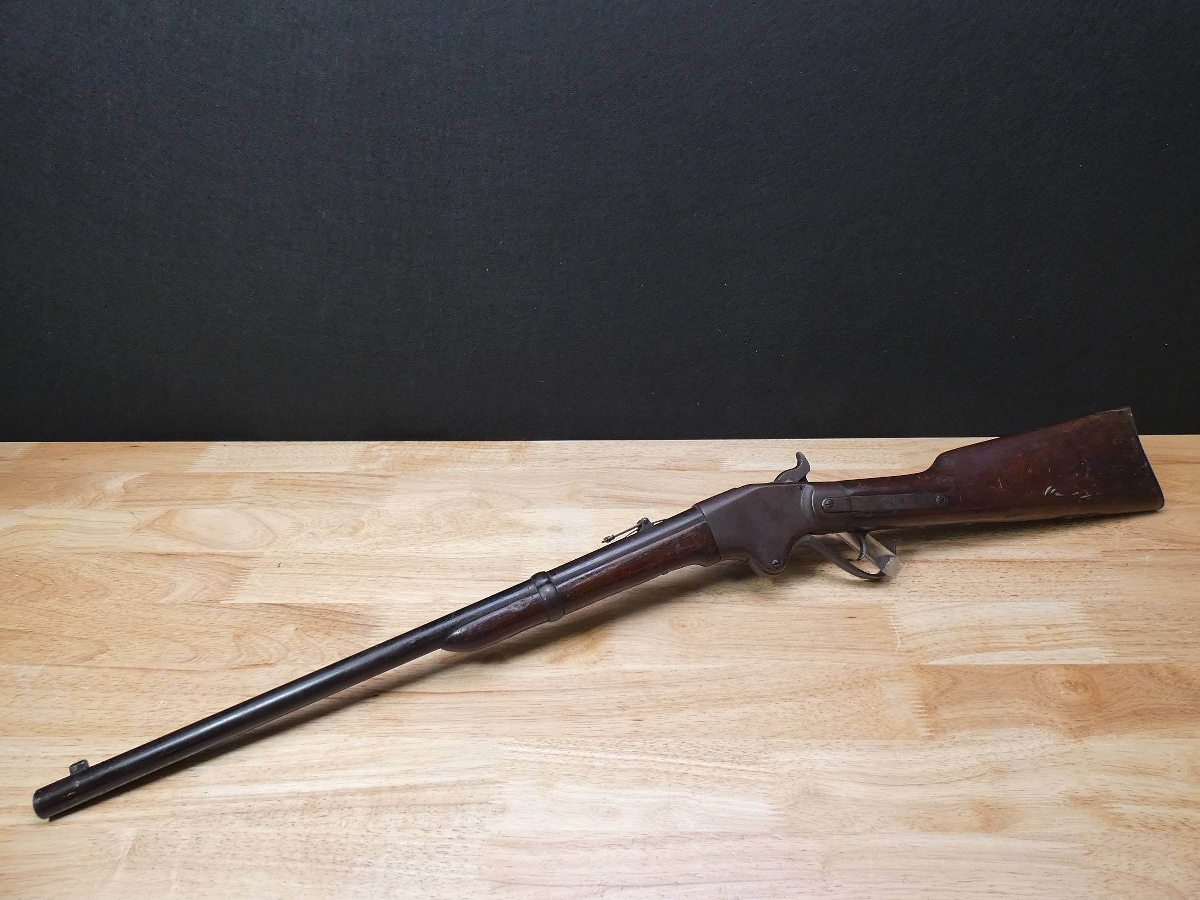 The Spencer rifle was the world’s first military metallic-cartridge repeating rifle, and more than 200,000 examples were manufactured in the United States by the Spencer Repeating Rifle Co. and Burnside Rifle Co. between 1860 and 1869. The Spencer repeating rifle was adopted by the Union Army during the American Civil War. However, it did not replace the standard issue muzzle-loading rifled muskets in use at the time by most of the fighting soldiers. Most rifles used by Civil War Armies were muzzle-loading single-shot rifles even though more advanced repeating rifles like the Spencer and Henry were available by the start of the American Civil War. The U.S. Army chose to stick with their muskets.

It took an audience between Christopher Spencer (the M1860’s inventor) and President Abraham Lincoln with a demonstration on the White House lawn to convince the Union to adopt the rifle. Lincoln was impressed with it and made a large order of Spencer carbines made for the Union Army from 1863-1865. The Spencer rifles were mostly used by Union Cavalry soldiers. The rimfire repeater gave the Union a huge advantage over their Confederate counterparts because it allowed them to fire more shots in a shorter amount of time with the advancement in firearm technology.

More than 150 years have passed since the inception of the rifle and its use in the Civil War. Finding one of these original rifles, even in poor condition, can be difficult. However, we are delighted to announce that we have an original Spencer Model 1860 up for sale and is D4 Guns’ featured gun of the week!

This Model 1860 Spencer lever-action carbine is in good condition especially considering its age with the exception of a large crack in the stock and many dings and scratches on the stock. This Spencer is a genuine Civil War rifle that was manufactured in 1864 and comes with the original magazine tube and both the serials on the barrel and the receiver match!

We believe this rifle may have been issued to the 19th New York Volunteer Cavalry Regiment, which is also commonly known as 1st Regiment of Dragoons around October 1864. The 1st Dragoons saw extensive action throughout the Civil War fighting in 64 battles and skirmishes. At the time, this carbine would have been issued to the Dragoons. They were under the command of Colonel Alfred Gibbs and General Philip Sheridan as a part of the Army of the Shenandoah. This rifle theoretically would have served the Dragoons through the next 6 months of war from the battles of Cedar Creek, Five Forks and the battle for the Appomattox Court House. The 1st Dragoons were present at the surrender of the Army of Northern Virginia in 1865 meaning this carbine may have also been present at the Surrender of General Robert E. Lee and the conclusion of the Civil War.

These are highly collectible for their role in US history and are harder and harder to come by as more time passes. This could definitely be a once-in-a-lifetime opportunity for collectors and Civil War enthusiasts. Be sure not to miss out on this opportunity and buy it quickly as we anticipate it will sell fast.