On a spring day in 1775 the first shot of the American Revolutionary War was fired at the Battle of Lexington. On that day, a rugged yet beautiful weapon was engaged in that first battle to mark a 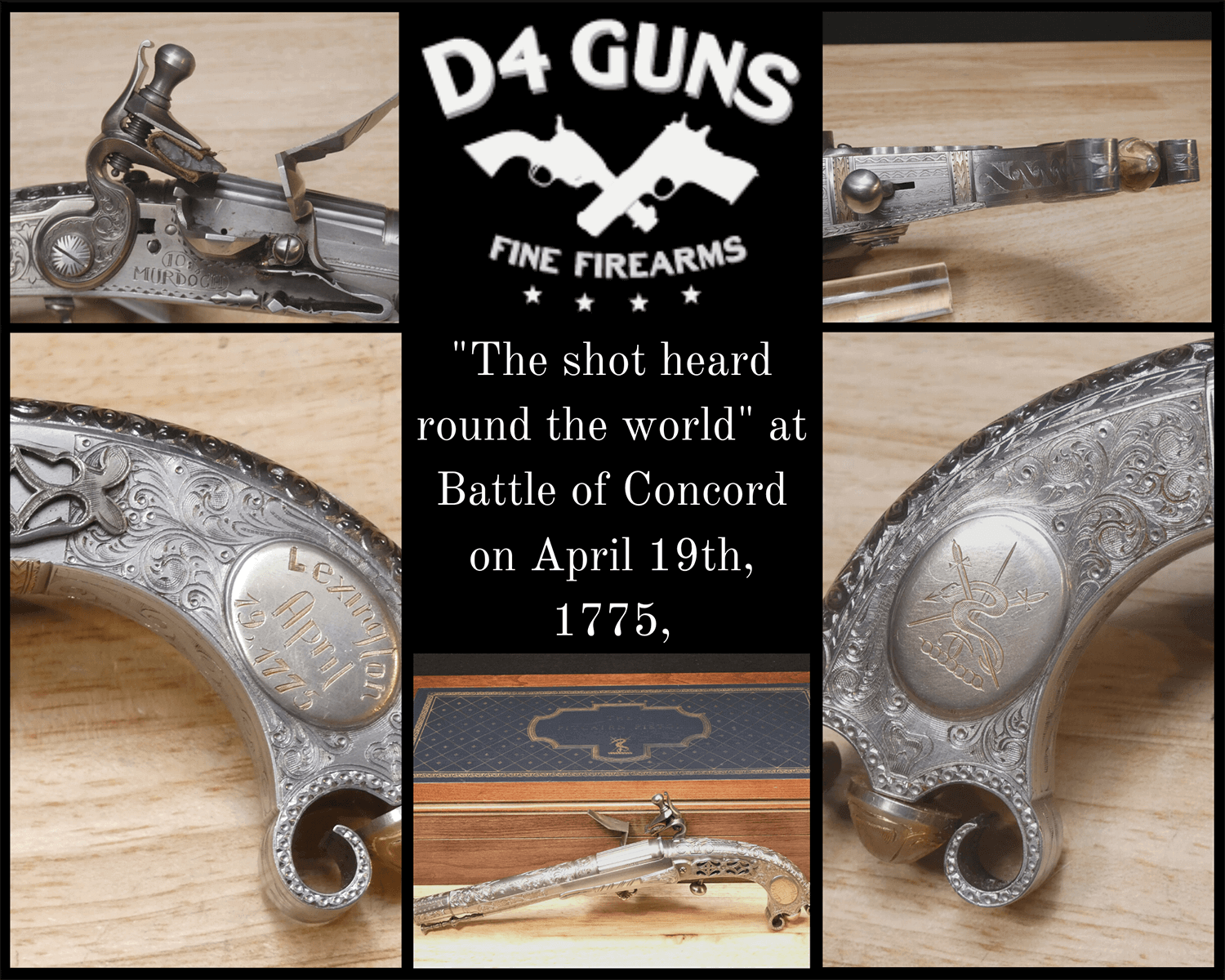 turning point that would alter the course of history forever. Historians believe that first shot of the American Revolutionary War was fired by British Major John Pitcairn with a Scottish Murdoch flintlock pistol.

The pistol’s origins can be traced as far back as the mid-1600s in a small trading village of Doune in Stirlingshire. This cross-roads town traded in everything so called highlanders needed and bought as they passed through this small village. A blacksmith in the village named Thomas Caddell came up with a way to improve on generic flintlocks of his day and his creation was the elegant looking Scottish Murdoch flintlock pistol.

Caddell’s factory evolved into a family business that lasted at least five generations. Other pistol makers followed his lead, including Murdoch, the name most associated with this weapon. Murdoch specialized in pistols which were heavily ornamented with elaborate engravings and inlays of gold and silver.

By the 1730s and 1740s, Highland pistols were highly sought after by regimental officers throughout the globe. George Washington was presented with two Doune-made pistols by his staff, which he bequeathed after his death to Major-General Lafayette.

The Caddell and Murdoch factories still stand in Doune, preserved as historical sites.

You can own this gun

Currently D4 Guns is proud to say that one of these lavish pistols is in the vault and ready to go home with one lucky buyer.

This Murdoch Scottish replica pistol was created by the U.S. Historical Society and the Eli Whitney Museum. There are Celtic silver inlays and meticulous hand engravings, using intricate scroll and arabesques, on the barrel, frizzen, side plate, grip, and cock.

The trigger is a steel ball design and the lock is a miquelet with horizontal (rocking) sear activating cock. There is a belt hook, steel ramrod, and a double curled butt with sterling silver capped pick, threaded between the curls on the butt. The lock is marked ÒMurdochÓ and the grips have inlaid silver monograms, the right shows a coat of arms with a snake wrapped around three swords and the left reads “Lexington April 19, 1775”.

Only 900 of these exact reproductions were ever manufactured.  This one is serial #269 (of 900), .58 cal, 7 1/2″ smoothbore barrel. It is in excellent condition and comes in a beautiful walnut and Plexiglas case, lined with blue baize and has a plaque stating “The Pitcairn Pistol/ Authorized by/Whitney Armory Museum/ And/ U.S. Historical Society”. An impressive looking pistol that would make a great display piece.