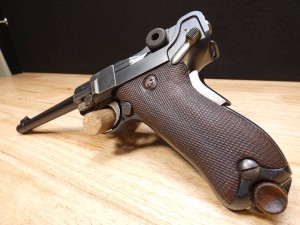 This DWM American Eagle Luger was commercially sold and is the model of 1900 that includes a grip safety, “Trench Art” wood grips with custom skull art carved in them, a wood-capped magazine and straw coloring to the non-blue finished metal parts that adds elegance to this distinguished and highly recognizable pistol. It was the company’s attempt to boost popularity in the U.S. civilian market and is a pre-World War I model.

The reason why it is called the American Eagle Luger is because the company stamped a gorgeous American crest on top of the receiver near the breach. Although there is a bewildering variety of lugers, especially in the subtle technicalities of the different variances, we examine the DWM American Eagle Luger and its significance.

In 1900 the United States Army ordered 1,000 Lugers in 7.65×21 mm Parabellum (or .30 luger) for infantry and calvary trials. It had some pushback from soldiers saying the caliber was too small and the firearm itself was unreliable, which led to DMW developing the 9mm caliber version of the Luger shortly after.

A very cool piece of American history that combines German handgun technology and American military testing and interest, which will be a highlight any gun collectors’ arsenal.