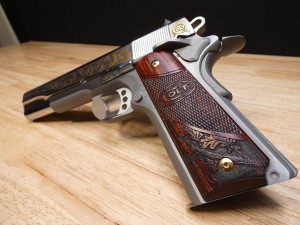 Here at D4 Guns, we are proud to showcase a rare model 1911 pistol that will be the centerpiece for any gun collector’s inventory. 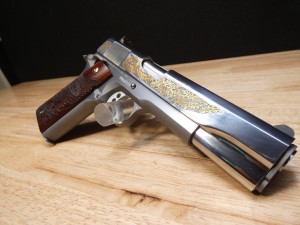 The Colt M1911 .45 caliber pistol originated in the late 1890s in search for a semi-automatic pistol to replace the variety of revolvers being used throughout the United States military. From there on, it’s significance in history, pop culture and its timeless design has endured more than 100 years and continues to be highly coveted.
The iconic Colt 1911 became a standard issued sidearm in World War II for U.S. armed forces to combat the Nazis and Japanese Imperial Army and continued to be the faithful sidearm of the U.S. military after WWII and through the Vietnam War.

Not only did it become popular in the military, civilians, popular movies, celebrities and even notorious outlaws boosted its popularity even more as time went on. Whether it is heroes like Dick Tracy and The Shadow or unsavory characters like Al Capone, Scarface or the menacing goons in the film Pulp Fiction, its popularity has never waned.